The Caraiman monastery is an orthodox monastery situated in Busteni, at the foot of the Caraiman Mountain.
The cross being seemingly the guardian of the path which lead the tourists and the pilgrims toward the monastery. While walking towards the cable car in Busteni, at a certain moment, a sign and an icon mark the steep path which leads to the monastery.
The path, winding as if in hiding, under the shady evergreens, leads eventually to a marvelous clearing, the mountain in plain sight. In this clearing, father Gerontie Puiu founded, with the help of Virgin Mary and God’s blessing, the monastery.
The monk needed many years to settle there and it was not a random place but the Blessed Virgin Mary pointed to it, as it has been told, in dreams. The monk depicted that even from birth he had been under the protection of Virgin Mary, who chose him for the accomplishing of this difficult and holy task.
The monk listened and followed the advice and guidance of the Holy Mother and he lived as a hermit for ten years in a cave, till the summer of 1970. For ten years, every night he used to admire the Cross from the Caraiman Peak.
Then, he said, “I swore to Holy Mary that, if I return from the big world, safe and sound, I will build a monastery, celebrating our Holy Cross, and heading onto the big Cross from the Caraiman peak. After the Revolution in 1989, he returned to Neamt Monastery, where the remaining monks recognized him, even though 30 years had passed.
He was made a superior and he joined the Seminary, even if he only completed elementary school in his native village. For a week he was a deacon, after that in 1992, the archbishop of the county appointed him priest, after the “tradition of Melchisedec”, because he was older than Jesus Christ. In 1995, while he was confessing a believer, Gherontie Puiu, at that time a priest at the Cetatuia Monastery from Iasi, had a stroke, and as a result he paralyzed partly.
He was to the hospital of Tatarasi, where he spent 3 months, after that he was transferred to the asylum from Sinaia.
The doctors who treated him told him that he needed many years for his recovery. Nevertheless, he stayed there for only one night.
Being in a ward with another priest and a Christian, Virgin Mary revealed herself again to the priest, this time very close and telling him: “You are here with a mission, remember!”. “How can I accomplish this, dear Mother, if I am paralyzed?” asked the monk. He was told:” Wake up, you are not paralyzed”.
And the monk remembered that Holy Mother continued: “You will find a fir tree with 6 branches, next to a body of fresh water on a field where you can see the big Cross next to which you swore the oath. There you should build the monastery”.
After many pursuits, father Gherontie saw his dream come true, starting in Palanca Clearing the construction of an abbey and of a church.
At the beginning of 1996, father Gherontie lived in a wooden chalet, in that remote place.
In its midst there was a fir tree, in the shape of a huge chandelier and being taken down by a storm, the face of Virgin Mary was found in it.
On its top there is a white cross which is lit at dusk. Inside the small chapel, being built around the tree, the trunk is enclosed between 4 wooden walls; each side is adorned with icons and the Holy Cross. 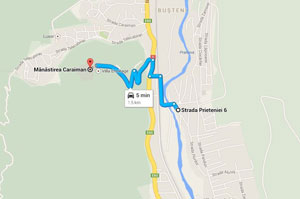