The Peles Compound- (the Peles Castle, the Pelisor, the Gasebo) which was built by King Carol I on the left shore of the river Peles in a picturesque spot, is one of the most looked-for places on Prahova valley.
The Peles castle in Sinaia, the summer residence of the Romanians monarchs, was built upon the wish of King Carol I (1866-1914) and designed by Johannes Schultz and Karel Liman and was decorated by the famous J. D. Heymann from Hamburg, August Bembe from Mainz and Bernard Ludwig from Wienn.
The Peles castle is considered as being the most important landmark in Romania, one of a kind construction from the point of its architectural and historical value.
It is considered one of the most important monuments in Europe which was built in the second half of the 19th century.
It was being built between 1875 and 1883 as a summer residence for King Carol I. After his death upon the year 1914 it has become a museum.
It is a magnificent building, in the exterior is decorated in the style of the German Renaissance, in the interior its 160 chambers are decorated in various styles, German, Italian, English Renaissance, German Baroque, French Rococo and Maury styles.
The Pelisor castle is located in the vicinity of the Peles castle and it was built between 1899 and 1903 in the style of the German Renaissance. It was officially opened on 24th may 1903, being designed by Liman who collaborated constantly with King Carol I.
The Pelisor was initially designed by King Carol I as a Swiss Chalet and not as a castle, because as the latter said, there could not be two royal castles. Nevertheless, the Pelisor with its German architecture and its tilled spires is a truly beautiful castle.
From the very beginning it was used as summer residence for the heir prince Ferdinand and his wife, Mary. Their children grew up here, too: Carol, the future King, Elisabeth (the queen of Greece), Marioara (the queen of Yugoslavia) and Prince Nicolae. Since 1993 the tourists have been allowed to visit the former royal suites, the offices, the children’s suites, Queen Mary’s painting workshop and the small Byzantium Chapel.
Corpul de Garda was built at the same time with the castle but it was being redecorated in the German style between the years 1908-1909.
The Economat was initially built as a simple house, it had been remodeled in the German style and presently it is a hotel.
The Foisor or the Hunting House was built along with the castle but after an extensive fire (1931) was redecorated upon the widsh of King Carol II. 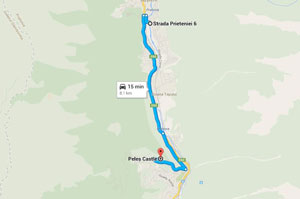