It is the largest and the most valuable monument in the town of Busteni. It is one of a kind in Romania, representing the sacrifice of our soldiers who died on the battle fields for the integrity and independence of our country.

It was built between 1926-1927, due to the initiative and concern of its Majesty Queen Mary and located on the Caraiman slope at an altitude of 2291 km.
The cross is made of steel supports on a concrete frame in the interior of which there is a chamber which hosted initially the generator which supplied the power for the 300 bulbs (500 W each). The dimensions of the monument are impressive, 48 m in height, and 14 m width. In the beginning the lighting of the monument was done by means of a generator localized in the concrete support which supplied the power for the 120 light bulbs.
In the year 1939, the Cross has been connected to the national power system and the generator has been given up as a source of power and the power station of Costila has been used, the connection being made through an underground cable.
Until the communist regime came into power in 1948, the Cross used to be lit on the night of Virgin Mary’s day (15th of August) and also for the Ascension of Jesus Christ (being celebrated 40 day after the Resurrection of Jesus Christ), when the Day of the Romanian heroes in also being celebrated.
During the Communist regime the monument was threatened with mutilation, a mayor being to loyal to the regime intended to cut its branches and to put a red star on top of it.
Until the year 1989 an electric cable was put and in 1990 the electric installation has been completed through the effort of the City hall in Busteni, the inhabitants and some legal persons in the area. The lighting installation has been periodically vandalized by some tourists who climbed the cross and broke the bulbs.
In 2003, the power installation became faulty.
For repairing it, many mountain rescue teams worked and they had to transport in the peak of the mountains all kinds and hundreds of equipment needed, during stormy, windy and foul weather.
The mountain rescue team replaced the bulbs which were out of order and they restore the electric installation in December 2004, the source of power being the station in Busteni. At present the monument is in the care of the of the Local Council of the town of Busteni.
In the present days, at sunset the Cross of Caraiman is being lit by 300 light bulbs and can be seen from a distance of tens of km. on the Prahova Valley. 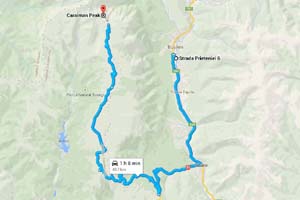 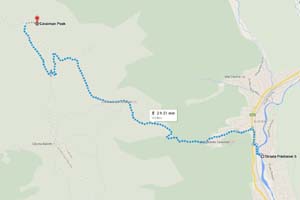