Ialomita Cave (1660 altitude)- is a big grotto in the southern wall of the Batrina mountain which leads into Ialomita valley towards Pesterii gates.
The depth of the cave is up to 475m, its bottom being situated 60m upward from the entrance of the cave.
From the cave’s mouth we enter the first big chamber, named Mihnea Voda cave, where there is Pestera Ialomitei church.
From the bottom of this cave, the way winds narrowly into a chamber in the shape of a spire, “Bolta lui Decebal”, from where there is a web of dead ends.
The path leads up into a gallery at the end of which there is a small water fall.
We climb onto a stair and we move on into a new gallery, which leads into a bigger grotto, on the spot La Raspantie.
From this place, a curve into the way starts right, goes down through a narrow path, leading into the place called “La Lacuri”, where there are two deep pools, separated by a stone. (the big lake usually dries out during the summer).
Coming back to La Raspantie, we continue to go up on a wooden stairs, reaching the biggest chamber of the cave, “the Bear Cave”.
At the end of this chamber we come across a stone slab, from where we get down into a smaller chamber, where we meet the spring of water which is flowing into the small lakes. From this spot we walk on through a narrow channel (“Galeria Apelor”), till the point called “La Altar”, which is the lowest point of the cave.
Even if the path does not end here, it is accessible only to very experienced climbers.
Also proper gear is mandatory. Between the years 1950-1956, researchers from the Emil Racovita Speology Institute from Cluj, along with mountain climbers from the Unions and the Central Army Association’s teams continued the exploration of the Ialomita cave, discovering three big galleries, two of which enfolding impressive calcite formations. It had also been stated that these three are going further along some big stone formations that hamper further exploration.
Entrance fee: 8 lei. The road Sinaia- Pestera (36 km): Sinaia (City hall)-Calea Moroieni-DN 71 (8.5 km). 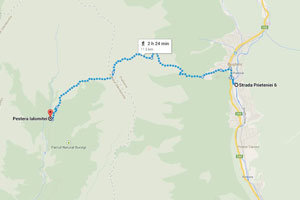